New mission to Mercury, called BepiColombo, will be Europe's first. It is a joint mission with ESA and JAXA. It will set off in 2015, and is due to arrive at Mercury in January2022. There will be two spacecraft: the Mercury Planetary Orbiter (MPO) and the Mercury Magnetospheric Orbiter (MMO).

Animation of Mercury's rotation in false colour to show the features. Find more on the MESSENGER website.

Mercury is the planet nearest the Sun. Apart from those comets and asteroids at the perihelion of very elliptical orbits, only dust and very small bits are thought to orbit the Sun closer than Mercury. Anything nearer the Sun than Mercury can only be seen if the Sun is eclipsed.

Because Mercury is nearer the Sun than our planet, we can only see it as a crescent or gibbous (more than half but less than full), because when its fully lit side is facing us, it is behind the Sun and cannot be seen. This is called superior conjunction, and when it is between us and the Sun, it cannot be seen as its dark side is towards us. This is called inferior conjunction. When Mercury is near superior conjunction it is gibbous, when it is near inferior conjunction it is a crescent. Mercury can be seen either just before dawn or just after sunset, near the horizon. It is too near the Sun for it to be safe to look at it through a telescope.

If Mercury passes between the line of sight of the Earth and the Sun, it can be seen like a black dot crossing the Sun's disc. This sight can only been seen with a telescope. (You must not look through a telescope directly, but project the Sun's image through the telescope onto white card, and look at and copy or photograph the projected image). This is called a transit of Mercury, and can be seen if inferior conjunction occurs around the second week of November, or the second week of May. This happens about every 7, 13 and 46 years in November and every 13 and 46 years in May. Carefully timed observations of the transit of Mercury from different places on Earth can be very useful. One of its earliest uses in the 17th century, was to determine the longitude of a place on Earth. The latest transit was visible from our back garden so we were able to see it. 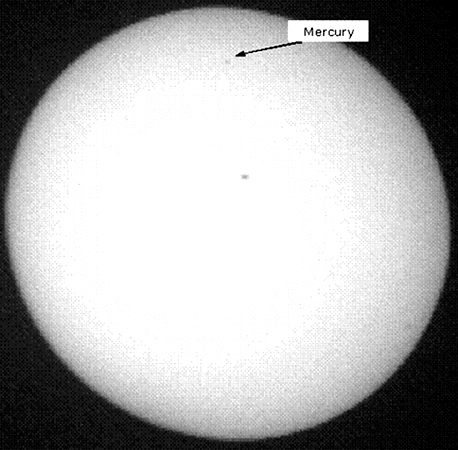 It was cloudy at first and we thought we would only see it on the ESO webcam but then it cleared just as things were under way. We were in email contact with the Echo but by the time their photographer could come it was over. Seeing the transit of Mercury was a chance of a lifetime - and from our own back garden. This image was taken from a back projection.

The transit of Mercury on November 8th 2006, could be observed on the other side of the world. This time Mercury was seen as a small dot near the bottom of the sun.

Johann Schröter (1745-1816) tried to draw surface detail he could see on Mercury. Percival Lowell (1855-1916) found canals on Mercury built by intelligent beings. In 1919 Eugenius Antoniadi (1890-1944), a Greek astronomer working in France, made a proper chart of Mercury's surface.

In 1962 Mercury was surveyed from Earth using radar. The rotation period of 58.65 Earth days was discovered then. This is about two thirds of its year as it orbits the Sun at a distance of 45 to 70 million kilometres in 88 Earth days. This means that to an observer on Mercury, the Sun would appear to move very slowly through the sky. One Mercury day would last about 176 Earth days. The Sun's apparent motion across the sky would not only be much slower than on on Earth, but it would move at an irregular rate. You would see the Sun come to a halt, then it would appear to move backwards for a time, before continuing in its original direction, having performed a complete loop in the sky. And in some places on Mercury you would be able to see two sunrises and two sunsets in each Mercury day!

Mercury's long afternoons and its closeness to the Sun, make its surface very hot in the day, (more than 227 degrees Celcius) while the long nights can get very cold, down to -173 degrees Celsius. At Mercury's poles, the Sun remains low on the horizon, and the shadows are long dark and cold - there being little atmosphere to diffuse the light and heat. Observations made by bouncing radar off Mercury in 1991 suggested possible ice deposits in these locations.

In 1973-1975, most of the surface of Mercury was surveyed by Mariner 10. The features are named after poets, artists and musicians. After Messenger's first flyby, 10 new features were named on Mercury. And link to find out what features discovered on other planets are named and how.

Mercury is the tenth largest world in the solar system, about one third the size of Earth and about the same size as Jupiter's moon Callisto (2439 kilometres radius). Its density is about the same as Earth and Venus. It has a magnetic field which is one hundred times weaker than that of Earth. Venus and Mars do not have significant magnetic fields, but Mercury may have a large iron core. Mercury's closeness to the Sun means that it formed from only the minerals that could survive high temperatures. Mercury probably melted due to heat released by radioactive minerals and its iron and other metals drained downward to the core. It has a very thin helium atmosphere.

The surface of Mercury is covered by dusty dark copper coloured rock covered with craters from impacts and volcanic activity, with lava flows. One of the largest of the impact craters is 1,300 kilometres across, and is called Caloris Basin.

Long scarps cut across the landscape, they were caused by the crust moving as the planet shrank in size. They form enormous cliffs, 2 to 4 kilometres high and more than 500 kilometres long, they are thrust faults. On one side of the cliff the land has been raised while on the other side it has been lowered. Huge craters have been split in two by these faults, one half 2 or 3 kilometres above the other.

It was thought that Mercury formed by accretion in the rings of dust round the Sun, but its high density with such a large amount of metal, and its violent past poses a problem to that theory. It has been suggested that Mercury may have formed in a different orbit and been deflected to its current position by a massive impact or impacts or encounters with larger planets.

In 1991 a Russian scientist proposed that Mercury could be a displaced moon of Venus. Mercury's early history shows massive bombardment of the surface causing craters and large mare basins like the Caloris basin which was caused by a massive impact. By about 400 million years ago, the impacts were smaller and there was volcanic activity making basins similar to the the lunar maria. Not a lot has happened in the past 3000 million years. 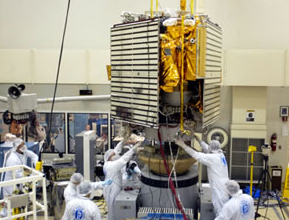 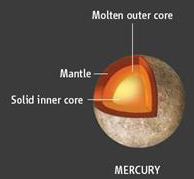 It was discovered that Mercury has a molten iron core. This takes up a much larger part of the planet's interior than that of Earth, Venus or Mars. It has been shrinking, causing the great long rocky scarps on the surface.

Mercury's iron core is covered with a much thinner layer of rock than that of Earth's. It has been estimated to not be more than 400 km. thick. As much of the core cooled, hardened and shrunk this would have caused the rocky layer to scrunch up in the long mountain ridges. New expeditions are planned to follow up the discoveries made by Messenger. Summary of the latest information on Mercury.