The story begins in 1778. Ivan Golikov, Ukrainian, was sent to Siberia for embezzling government funds. His niece Natalya was married to Grigory Shelikhov pictured left.

In 1783 the Shelikovs went to Alaska and establish trading stations there. They thought there should be better regulations for trade and settlement there, but could not get Empress Catherine the Great interested.

Their daughter Anna was married to Nikolai Resanov (also spelled in English: Rezanov) pictured left, who was at Catherine the Great's court.

In 1795, Grigory Shelikhov died but Natalya continued to run the company. In 1797, after a merger it had grown and was called the United American Company.

Resanov's efforts at court eventually had the result of a 20 year charter and the company was now a joint stock company called the Russian American Company.

Aleksander Baranov (born 1747) had let his wife and daughter to go to Irkutsk.

In 1788 he became manager for Shelikov in Alaska. It was not easy to get there. He was shipwrecked and sranded on Unalaska Island. 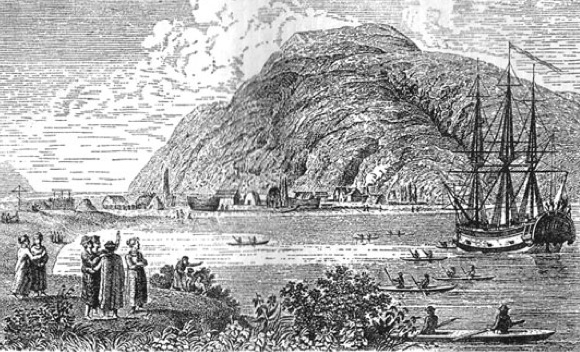 Baranov finally made it to Alaska in 1791, and moved to Kodiak. Here he improved the harbour, the housing and other amenities.

They collected furs here - sea ofter and other desirable furs. Boatloads of settlers arrived from Okhotsk. Baranov married a local native girl and settled down there.

Catherine the Great died in 1796, for the next five years the Tsar was her son Paul I, who was then succeeded by his son Alexander I. By 1799, all Alaska and the Aleutians were under Baranov - he was effectually governor of Russian America. And he had ambitions for the country.

This brought him into competition with British and American interests. The Americans were agressive and operated a slave trade, which brought them into conflict with the Native Americans.

In 1802 Russian colonists in Alaska were attacked by the Thlingits.

Russian America had serious problems with supplies. This could be solved if trade with Japan was possible.

In the 1630s the Tokogawa Shogunate, that ruled Japan since the civil wars felt threatened by the increasing foreign influence from overseas traders like the British and Dutch, and even more so by the Jesuit missionaries. All foreigners were expelled. Overseas trade was forbidden. Expat Japanese living and working abroad were not allowed to return, and further foreign travel was forbidden. In 1641, foreign trade was restricted to certain Dutch traders at Nagasaki.

In 1803, two ships the Hope and the Neva set sail from St. Petersburg to head for the North Pacific via Cape Horn - the southern tip of South America, and Honolulu. The Neva arrived in Alaska in 1804, and help defeat the Thlingits. A new colonial capital was built called New Archangel - later renamed Sitka.

The Hope went to Petropavlosk in Kamchatka, then on to Japan with a document from the Tsar. Resanov was on board as the Tsar's envoy to Japan. His wife Anna had died in childbirth and this was a chance to get away from that tragedy. 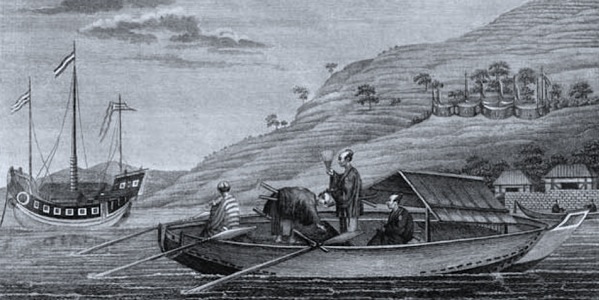 When Resanov arrived on the Hope at Nagasaki, in October 1804, he and the others with him were all imprisoned, and kept imprisoned all winter. His credentials as ambassador from the Tsar were ignored.

Resanov was extremely bitter about this treatment, especially when in Alaska he saw the state of the company ships and of the Alaskan colonies, again under attack by Thlingits. Baranov was trying his best but was getting little help from his government. Or from the Orthodox missionaries sent by Catherine the Great in response to a request from Shelikov in 1794 - and financed by the Russian American company.

With his own money Resanov bought an American ship - the Juno, complete with its cargo of food. In 1806 he took the Juno down to California to get supplies from the Spanish who ruled California.

There was a Spanish embargo on trade with Russia. However the Commander Don Dario Arguello was pleased to have the opportunity to entertain a Russian Count in his home. What's more single and free to marry his sixteen year old daughter Maria Arguello de la Conception. The religious differences were easily overcome in the ceremony. Once he was betrothed to the Commander's daughter, the Governor of California allowed the Juno to obtain supplies to take back to Alaska.

Maria had to wait to be a bride - as a Russian nobleman, Resanov had to get permission to marry from the Tsar. He headed back to St. Petersburg, across Siberia. This journey then used to take two years. Resanov only made it half way - a year into his journey, he fell ill and died at Krasnoyarsk.

Meanwhile Maria waited and waited to hear from him. She knew it might be some years. But she did not get news that Resanov had died for fourteen years. Shattered by the news and knowing she would never now have a husband, she retreated into a convent and became a nun.

The Russians continued unsuccessful attempts to get trade with Japan. But thanks to Resanov they were sucessful in establishing forts and settlements on the Western coast of American including San Francisco and could now supply Alaska from California.

Baranov remained governor of Alaska for 23 years. He wanted to retire earlier, but his replacements all perished on the way there. Finally in 1817, when Baranov was 70, Captain Leonty Hagemeister arrived on the Kutuzov as the new manager of the comany while the colonial administration was handed over to the husband of Baronov's daughter Irina, Lt. Semyon Yanovsk. Baranov then left for "home" on the Kutuzov but died on the way - he was 71, and was buried at sea.

The Russian colonies continued to feel threatened. In 1858, they were terrified after hearing that militant Mormons might invade Alaska to settle there.

After the Civil War, the new U.S.A. was expanding its control across the continent. The Russian government decided they would accept the sale of Russian American colonies to the U.S.A., as that would help repay Russia's debts after the Crimean War.

This was bad for Alaska as it lost its civilian government. The USA did nothing for many years except evict Russians from their homes for new good reason and cause unnecessary hardship.