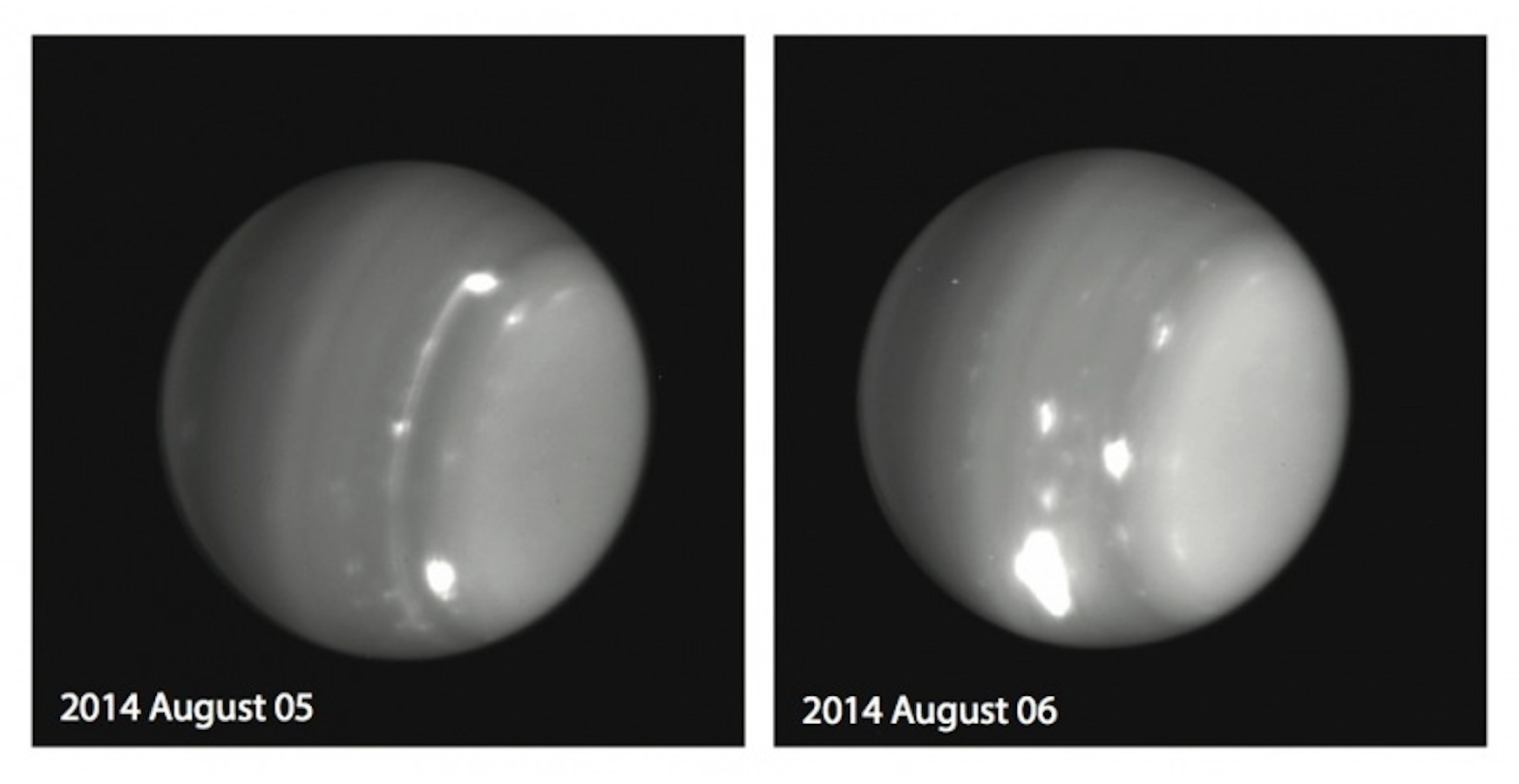 Observers using the Keck Observatory in Hawaii have seen huge storms develop on Uranus. As can be seen in the photos.

The third of the gas giants. Uranus was discovered in 1781 by Caroline Herschel and her brother William. William thought it was a comet at first and his calculations showed it getting bigger and bigger as he thought it approached the Earth. When observations and calculations from other astronomers in different countries came in, it was realised by them all that the Herschels had discovered a planet, and William hastily revised his data.

Some wanted to call the planet Herschel, but the Herschels called it Georgius Sidus (George's Star in Latin) after King George III who funded them. Bode suggested Uranus after the Greek God of the Heavens who had been castrated by his son Chronos the God of Time (see Saturn). Eventually this was to be accepted internationally as the planet's name.

Like the other gas giants, Uranus is surrounded by rings of small particles. They are very dark, and like Saturn's rings "shepherded" by tiny satellites. Nine of the rings were first discovered in 1977. (After which some astronomers wished it was not called Uranus and tried to pronounce it differently, while others enjoyed the joke). Two more rings were discovered in 1986 by Voyager 2 and more since - 12 so far.

It is possible the rings were first discovered 200 years earlier in 1727 by Herschel.

New edge on view of the rings of Uranus from Hubble in 2007.

The orbit of Uranus round the Sun takes about 84 years, which is why, although it had been seen many times earlier (it is not only visible through a small telescope but to the naked eye) it had not been recognised before as another planet. The diameter of Uranus is about 52,000 kilometres. Its rotation is 17.3 hours, but as the inclination of its axis is 98 degrees, that is, it is on its side pointing down, do it looks like it rotates backwards. As it rolls along first one pole then the other pole faces the Sun.

Uranus looks blue in colour with bands of cloud. On top of the clouds its temperature is 60K. There are storm clouds and vortices. White fluffy clouds on top of the blue bands of clouds were used to measure the speed of jet streams in the upper atmosphere which is 100 metres a second. (On Earth the jet streams are 40 metres a second). The winds are blowing in the same direction as the planet's rotation. On such a low axis this means the heat from the Sun is distributed all over the planet evenly. It does not have colder poles as on Earth.

In August 1994 Hubble took pictures of Uranus and found more interesting weather. The planet's angle to the Sun had changed as it had moved on its orbit. Unlike the other gas giants, Uranus does not have an internal heat source, so its changes in weather dependent far more on the effect of the Sun.

The poles of Uranus' magnetic field are offset from the axis of rotation by 60 degrees. This was used to calculate the rotation period of 17.3 hours. The 'magnetail' trailing behind Uranus corkscrews because of the tremendous difference between the magnetic and rotational poles.

Observers using the Keck Observatory in Hawaii have seen huge storms develop on Uranus. As can be seen in the photos.

More on Cupid, Mab and the rings - dust from Mab forms one of the rings.

Miranda is 236±3 kilometres in radius, 1.35±0.39 density. It was discovered in 1948 by Gerard Kuiper. It has a very mixed and interesting terrain of ice, silicate rocks and frozen methane. The names of surface features are taken from Shakespeare. There are grooved landscapes, cratered like on our Moon, and also giant scarps or cliffs. There are three massive, prominent angled, ridged features. These are called the Inverness Corona, the Arden Corona and the Elsinore Corona. It is speculated that Miranda had once been severely fractured, and has since reassembled, the features being caused by the fragments. This is by no means certain though. 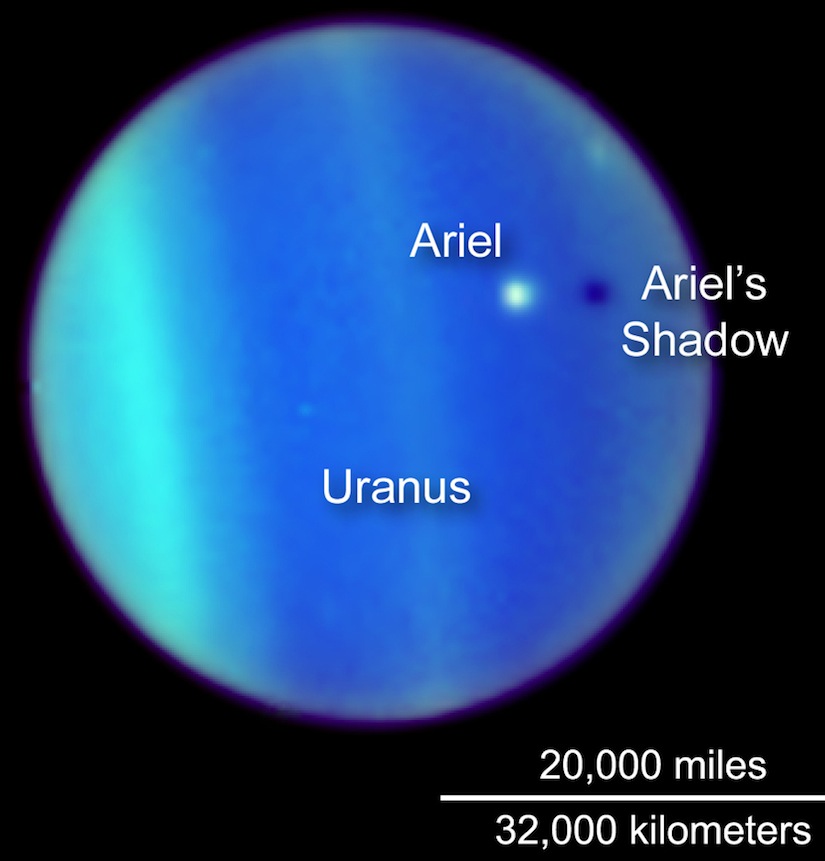 Ariel, 579±2 kilometres radius, 1.66±0.30 density. Ariel was discovered in 1851 by William Lassell. It is still very active geologically, so few impact craters are visible. Its features are named after good spirits in world myths. Valley and fault scarps crisscross the surface, which has been smoothly flooded in places with ice. There has been tectonic activity with plate movement causing the faults on the surface. Ariel may still be an active world.

Umbriel is 586±5 kilometres in radius, 1.51±0.28 density. Also discovered in 1851 by William Lassell. Its features are named after evil spirits. Umbriel is a very dark, still, world with many craters. Nothing has happened here for a very long time.

Titania is 790±4 kilometres in radius, density is 1.68±0.09. Discovered by the Herschels in 1787. Its features are named after female characters in Shakespeare. Subsidence features and trenches and scarps show that Titania has has volcanic processes, perhaps caused by tidal heating, and has been an active world geologically.

Oberon was also discovered by Caroline and William Herschel in 1787. Its radius is 762±4 kilometres. Its density is 1.58±0.10. Its features are named after Shakespearian heros. Oberon is mostly water ice, silicates and methane with other carbon related compounds. Its surface is heavily cratered with possible faults - there is no evidence of any recent geological activity.