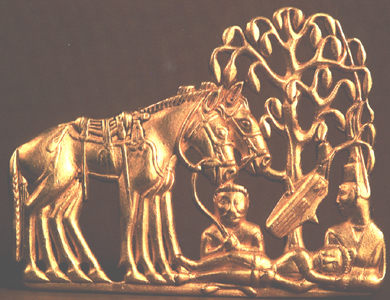 After the Ice Age

15,000 years ago great herds of huge hairy mammoths still roamed the steppe tundra south of the ice across from central Europe, South Siberia and up the Lena valley to the Arctic Ocean. But they were starting to become increasingly scarce. The last mammoths survived to about 4,000 years ago, because they were stranded on Arctic Islands left by the rising waters as the ice melted. And out of the reach of hunters.

Along the shores of the North Pacific Coast, there were rich resources for the hunters and gatherers, continuous throughout the seasons of the year. The climate there was actually milder than today, since the lower sea levels caused by so much water trapped in the ice, meant that icy tundra stretched across what is now the Bering Straits from Chukotka to Alaska.

From at least 30,000 years ago the hunters and fishermen along what was then almost continously coastline, down the American coastline and over the centuries spread over the entire continent - then filled with big game animals. Except in the frozen north. Most of what is now Canada and the northern part of the USA was covered with ice - in places a mile thick.

Many similarities can be found between the American cultures - traditional decoration motifs, legends and beliefs etc. and those of Pacific cultures.

About 8,000 years ago, global warming had melted the ice-cap until it was about the same as it is now. The resultant flooding changed the landscape. The great rivers, like the Ob, Yenesei and Lena, now flowed into the Arctic during the summer, so draining the great inland lakes.

The technology of the people living in Yakutia then, is referred to as Neolithic, and has been called by archaeologists Yury Mochanov and his wife Svetlana, the Syatakh Culture. This technology is found all over North East Asia.

It is characterized by polished stone equipment, such as arrow heads, double-edged knives, scsrapers, adzes, burins (for piecing leather etc.)

They also had bone harpoons and there is evidence for fishing nets, and boats, although these organic remains, like the clothing, rarely survive.

They also had baked clay pottery containers etc. to use for cooking, storage and eating. Net-like decorations were pressed into the wet clay before firing.

Although fired clay figurines have been found in Eastern Europe dated back to the height of the ice age, the earliest remains of pottery vessels found so far date to about 15,000 years ago and have been found in Japan. So this useful technology may have spread from there. But much also depended on the availability of the materials, and also on a more settled lifestyle, since people moving on every few days would find pottery containers a bit too fragile.

Even though groups of people still moved in the course of the year and seasons, from place to place - it was usually a trail from and to the same places at the same times of the year.

Rock drawings can be found dating back to this time. (They can often be dated by the film of new material covering them). Although many drawings are not clear, some of them are more obviously showing rituals and mythical or celestial events. And the sites continued in use for thousands of years.

By about 6,000 years ago, the technology had evolved or been replaced by the Middle Neolithic Bel'Kachi culture.

This is charaaterised by worked stone of many kinds, such as polished adzes, axes, scrapers, arrow heads, burins, fish-hollks, harpoons, needles.

Pottery was ornamented with a cord pattern or incised or imprinted with cut decoration.

About 4,00 years go, the late Neolithic Ymyyakhtahh culture spread noth from the Bailkal region. This also started using copper and bronze metals. It spread as far as Alaska to the east, and Scandinavia to the west.

The characteristic linked plate chain armour is now found, (the plates were originally and in places short of metal, bone) indicating that war-fare had become well organised with large bands of well-equipped armoured warriors. Hence the spread across the continent of these people and their life-style.

Ust'-Mil' culture. Bronze foundries have been discovered with tools, moulds, belows, etc. The bronze things made are very similar to bronze wares found in other parts of Siberia and Central Asia - and also much like the things found across the continent from Europe to the Far East. They include the very characteristic axe-head with loops to attach it to the handle. These are found in hoards so may have been a ceremonial currency - a bronze axe is of little practical use. There are weapons like swords and spear heads.

There are also finds of pottery patterned with checks, incised stamp decoration, or a pattern looking like chains of beads.

In Siberia, though, the basic economy still depended mainly on fishing, with hunting and gathering. Farming - which was now happening further south, was not so possible in the terrain of marshland and dense taiga.

Some links for further information: