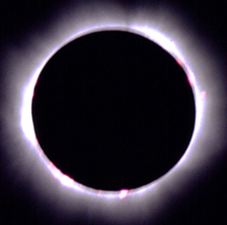 By coincidence, the sun and the moon appear from Earth to be about the same size in the sky. This means that at times in its orbit the moon will be in the line of sight in front of the Earth to observers on the Earth. When it covers the sun completely, this is quite spectacular.

Here is a diagram showing how the movements of the moon around the Earth can cause an eclipse, either of the moon or of the sun.

This cycle had been calculated by astronomers more than 6,000 years ago. Records have survived from the Sumerians, Chinese etc. The Saros cycle is named from Sumerian, and later Babylonian astronomical tables which have mostly survived to the present. It was given the name by Edmund Halley who was one of the first of the "modern" astronomers to realize that ancient records were useful. (He had traced records of what became known as "Halley's Comet" and there knew it had an orbit around the sun.)

This cycle of over 18 years (about 18 years 11 days 8 hours) was already known to medieval clock makers who put this cycle onto the mechanism of their astronomical clocks. It was called the "Dragon Cycle" for as was once known or at least embedded in mythology, it is at such times that the sun is eaten by a dragon. On medieval clocks it was traditionally marked out by a painting of a dragon.

It was from looking at the ancient records of eclipses, that Edmund Halley discovered that the moon is gradually moving further from the earth. And the earth itself is spinning more slowly on its orbit over time. Going back into the past, there was more chance of seeing a total eclipse of the sun. So the days were shorter, with more in a year.

The sight of a total eclipse of the sun, is still a sight worth seeking for the experience. It is on many "must see before you die" lists. However some people after their first successful experience (there is a good chance of being clouded over) get addicted. Eclipse holidays and expeditions are arranged. We went on one such to Austria for the 1999 eclipse. I manned the telescope helped by two keen young children, while Merv did the photography. We were so lucky as the clouds parted at just the right time. See photo at top.

Don't forget to get the equipment sorted out before you go. You must have the correct sort of filter for your camera - and a tripod for it. You must have sorted out card - white for the projection, and black to make a shield around your telescope (sticky tape and scissors useful) to watch the eclipse as it progresses and can be seen on the card. For partial eclipses of the sun you can take photos of the projected image, which does not need any special filter. Don't forget to put on the cardboard eclipse watching specs - over your normal specs too.

When is the next eclipse you can see?