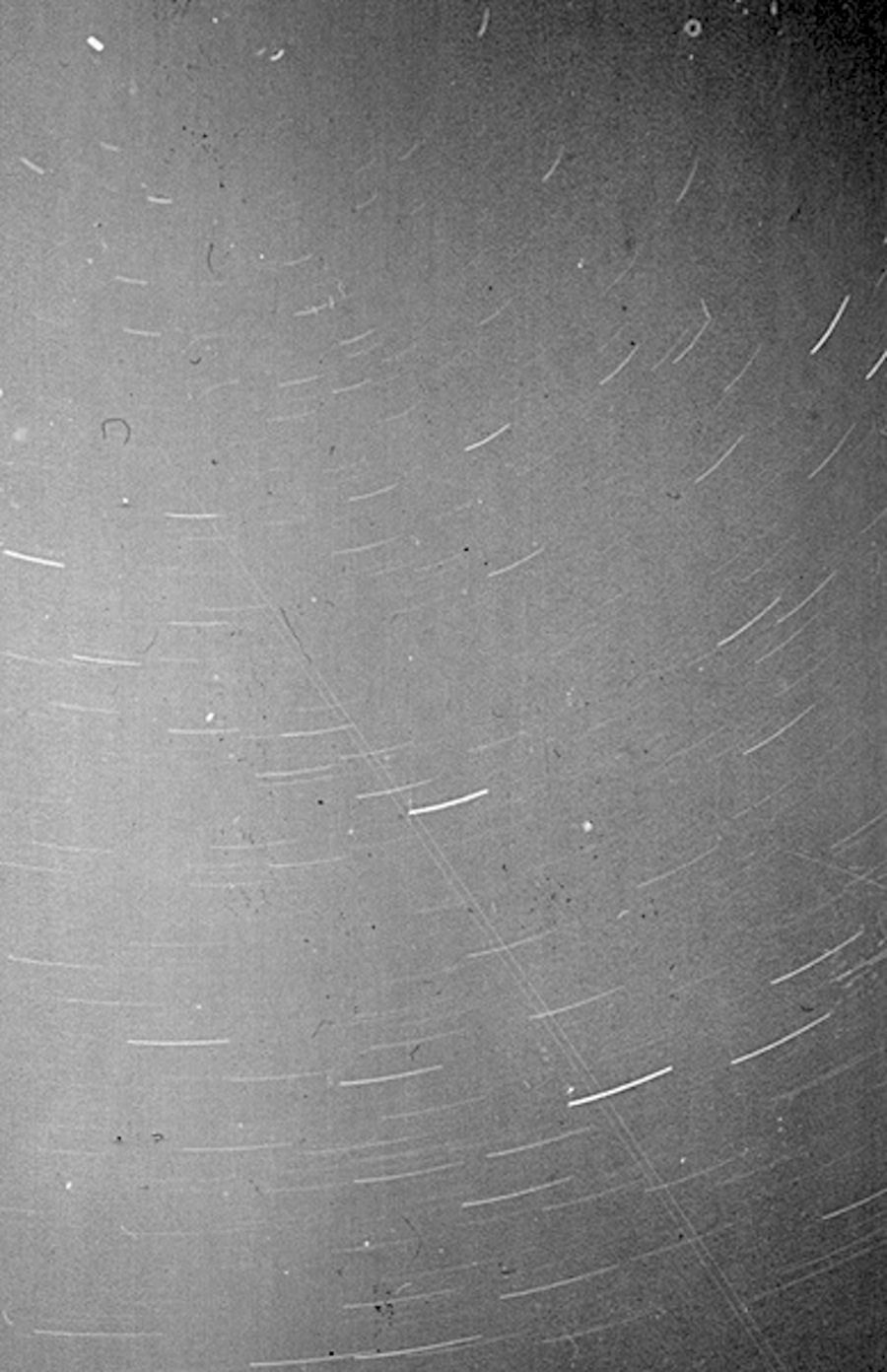 The world in which people lived was seen as covered by the heavens like an inverted bowl or tent cover. It was observed that the heavenly bodies rotated during the night and during the year about a single point, which seemed immovable.

At times in history, this was marked by a star which seemed to fix the top of the universe in its place. So the pole star has been called the Nail Star, or northern nail. The celestial pole also marked the place where the heavens were upheld by the world tree which had its branches in the sky, and its roots in the underworld below the land where people lived, and up which the shaman could climb to intervene with the gods. This central axis of the world, about which the rest appears to revolve, has also been visualized as a mountain or a pillar.

The celestial pole is not always marked by a star, or by the same star, for the Earth's poles swing round in a circle during the course of nearly 26,000 years (the Platonic Year). This is called precession.

Gravitational influences cause periodic wobbles in the precession which is called nutation. The main variation is of 18.6 years caused by the Moon's main cycle in its orbit round the Earth. There are smaller variations within this. The Earth's polar tilt which is at present averaging 23 degrees and 27 minutes, also varies slightly during the course of 40,000 years and within this cycle at periodic and and irregular intervals.

The concept of the universe as a mill or machine rotating about its axis could date from the 5th century BC, when geared machinery for mills was in use, but the idea may be very much older and based on simpler machines than the complex geared mechanisms developed by then. In Indian mythology, Vishnu is pictured on the central mountain axis of the universe in the primordial ocean of milk, a serpent coiled about, gods and demons pulling at its head and tail, thus rotating the central mountain and churning the milky oceans to create the things in the world.

In a Khanti story from Western Siberia:

"There is a mill which grinds by itself, swings of itself, and scatters the dust a hundred versts away. And there is a golden pole with a golden eagle on top which is also the Nail of the North. And there is a very wise tomcat which climbs up and down this pole. When he climbs down, he sings songs, and when he climbs up, he tells tales."

Before it was known that the Earth was spherical, in the Chinese Kai Tian (Heavenly Cover) theory of the universe, the heavens were like a bowl covering a square Earth (the Chinese Earth was symbolically square) which was domed in the centre. The Great Bear constellation was in the middle of the heavens, people lived on the middle of the Earth. Rain filled a great ditch around the square Earth. The heavens were round and "rotated like a mill" from right to left, carrying with them the Sun and Moon which also had their own separate slower motions in the opposite direction. The Sun was seen as travelling round the celestial pole lighting first one then another part of the Earth's surface, its distance from the pole varying according to the season. The changing seasons were also explained by the heavens sliding up and down the celestial pole as they rotated round so the North pole was further from the Earth in summer than in winter.

In the Kalevala, the collection of Finnish folk tales compiled in the 19th century by Elias Lönnrot, is the story of the Sampo. The Sampo was a magic mill with a many-coloured cover, which as it spun round ground out salt, grain and coins - prosperity in fact. It was made by "craftsman" and "eternal smith" Ilmarinen (his name derives from the meaning "world") for Louhi, Queen and Shamaness of the Northern Land. Louhi kept the Sampo locked behind nine locks in the copper mountain where it put down three roots and ground out prosperity for the northern lands. Ilmarinen formed part of the team of three shaman- blacksmith heros who plan to steal the Sampo. One is "steadfast" "old" Väinämöinen, player of the kantele (a stringed instrument) charming all who hear the music, creator of the world. Son of Kalev (the giant god of time who lived inside a mountain occasionally riding forth on horseback armed to the teeth), so he knew the rounds of the stars, the Moon and the Sun, and noted how much time it was from the coming of the birds until summer.

The third hero is "restless" Lemminkäinen whose name comes from a word for "love" and who in one story is killed and dismembered into little pieces by Louhi, but is put back together and restored to life by his mother.

These three heros find the Sampo and break through the nine locks, but have to enlist the aid of a monster bull to uproot it. They carry off the Sampo in their arms to their boat. Louhi gives chase and calls up a terrific storm. The Sampo is broken. Part falls into the sea where it grinds out salt forever. Väinämöinen rescues other bits of the Sampo and buries them in the soil. Trees and crops flourish here, while the North, without the Sampo is barren. In revenge Louhi steals and hides the Sun and Moon, and Ilmarinen makes replacements to use until they get the real ones back. (Legends about the stealing of the Sun and Moon are found all over the world).

The Maelstrom/Magic Mill legends, and the North Sea Tsunami

During the ice-age, what is now the North Sea was part of a cold tundra on which mammoth herds, roamed and people lived - hunter gatherers following reindeer herds, and fishing by the rivers. The effect of global warming after the ice age was not gradual but as the ice became unstable on the Norwegian mountains the giant glaciers filling the fiords they had formed would suddenly break off great chunks of ice, rocks and mud into the sea causing massive tsunamis flooding the lands with great whirlpools. The biggest happened about 6,100BC (the Mesolithic) and that was the one that left Britain as an island, it was caused by landslides in Norway - the Storegga Slides -and triggered a massive tsunami some 10m. high, which flooded the low-lying lands and the marshy river lands changing north-east Europe into the islands which are now Britain and Ireland. Some evidence of the disaster and the survivors have been found on the north-east coast of Scotland and from the Solent where the remains of 8,000 year old log boats have been found. And the horrific whirlpools which a tsunami can produce could be seen in the recent tsunami which hit north-east Japan and trapped ships dragging them in. Just as remembered in legends about the maelstrom and the magic mill.

How the northern Nail Slipped out of Place

Legends about the Pole Star or "Northern Nail" which fixed the heavens in place, coming out of place, and subsequent disaster could stem from observations that the pole star had changed position, as well as from the fact that the axis of the universe is apparently inclined, and not overhead.

There were several legends to explain the inclination of the North Pole. The height of the North Pole above the horizon depends on the latitude above the equator where it is on the horizon. Only at the North Pole where no one lives can it be seen overhead. To observers it appears that the pole has slipped from its obvious proper position overhead. This feeling would be reinforced by the acquired knowledge that the pole has moved and it no longer marked by the same star. The thought that the axis of the universe was capable of slipping out of place was an alarming prospect and is recorded in many legends.

In Saami mythology, when the star Arcturus (which represented World-Surveyor-Man who watches over the world and safeguards the Sun) shoots down the Northern Nail with his arrow, the heaven will fall, crushing the Earth and setting fire to everything. It is the last day.

A similar story is told by Plato in his Timaeus in which an aged Egyptian priest tells Solon the 6th century ruler of Athens, in a story supposedly related by Critias: who may have told it to Plato in the first place:

"Your own story of how Phaethon, child of the Sun harnessed his father's chariot, but was unable to guide it along his father's course and so burnt things on the Earth and was himself destroyed by a thunderbolt, is a mythical version of the truth that there is at long intervals a variation in the course of the heavenly bodies and a consequent widespread destruction by fire of things on the Earth."

copyright of Heather Hobden and The Cosmic Elk