In which Japan attacks Russia and Wins

During the 1890s it becomes evident that a struggle is developing in northeast Asia between two powers, both in expansionist mood and both eager to profit from the continuing weakness of China. One of the contenders is a vast but incompetent European empire, Russia. The other is an emerging and already fighting-fit Asian empire, Japan.

Russia has won Vladivostok from China some decades previously, in 1858, but it is in the 1890s that Russian interest in the far east grows most visibly. In 1891 the heir to the throne, the future Nicholas II, is sent on a high-profile tour of the region.

In the same year work begins on a vast Russian engineering project to open up the far east. At Chelyabinsk in the Urals, and at Vladivostok on the Pacific coast, construction gangs lay the first sleepers of what will eventually be completed, in 1905, as the trans-Siberian railway.

During these years Japan's expansionist tendencies become mainly evident in relation to Korea, its nearest neighbour and a rich source of iron and coal. Korea is also of great interest to Russia. But it is, by long tradition, a 'tributary kingdom' of China.

Japanese interference in the affairs of Korea causes successive crises, but these are resolved by diplomatic means until 1894 - when an uprising provides an excuse for both Chinese and Japanese armies to enter the kingdom, to assist the Korean ruler in putting it down.

The result is warfare between China and Japan, and an overwhelming victory for Japan. When peace is agreed, in the 1895 treaty of Shimonoseki, China accepts punitive terms - a huge indemnity, and the ceding to Japan of Taiwan and the strategically important Liaotung peninsula to the west of Korea. But Japanese control of this peninsula is more than Russian Tsar Nicholas II, with his own ambitions in the region, is willing to accept.

Russia persuades France and Germany to join diplomatic forces in the so-called Triple Intervention, which insists upon Japan returning the Liaotung peninsula to China. China, in recompense, is to pay an even larger indemnity to Japan - for which Russia provides the necessary loan.

Nicholas II builds on this success by concluding, in 1896, a treaty with China. In return for guaranteeing the integrity of Chinese territory, he is granted the right to build, and to defend with Russian troops, an important section of the trans-Siberian railway through Manchuria.

Any Japanese doubts as to Russian intentions are dispelled in 1898, when Nicholas II seizes Port Arthur, the strategically important harbour at the southern tip of the Liaotung peninsula - the very area which Russia has, three years previously, denied to Japan.

Meanwhile Japan and Russia have also been at loggerheads in Korea. In 1895 Japanese assassins kill the queen consort of the Korean king, who takes refuge for a year in the Russian legation in Seoul. When the king recovers his authority, he understandably is inclined to favour Russia rather than Japan. A direct clash between the two powers seems increasingly predictable.

But it is not the Japanese custom to give warning. 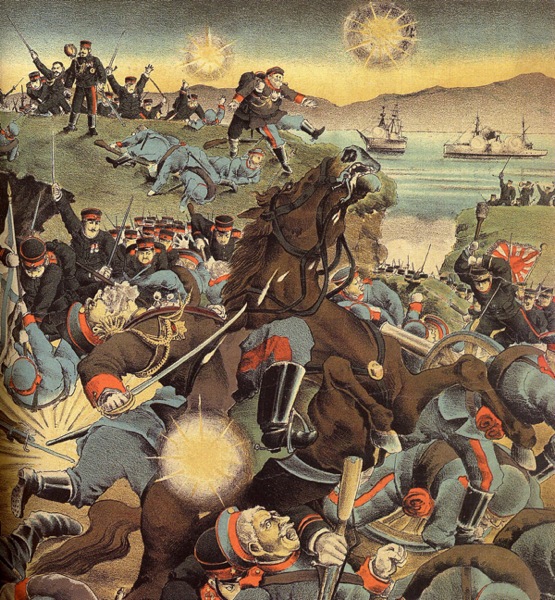 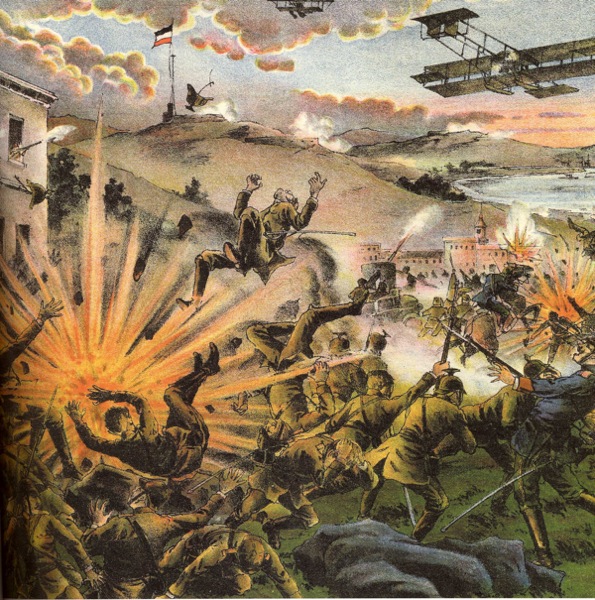 In a foretaste of Pearl Harbor nearly forty years later, a Japanese fleet launches a devastating surprise attack on Port Arthur in February 1904. Many Russian warships are destroyed. The rest are blockaded in the harbour.

In March a Japanese army lands in Korea, near Seoul, to be followed by three others elsewhere in the region before the end of June. These forces meet the Russians in a series of engagements which are either indecisive or are clear victories for the Japanese. The climax is the three-week battle for Mukden (now Shenyang) in February to March 1905, in which 270,000 Japanese prevail over 330,000 Russians.

After decades in which China has been powerless against western armies, these first Asian victories over European powers are an exhilarating experience for the Japanese. They are about to be capped by an even more convincing demonstration of Japan's new role as a modern military power.

It is obvious that Russia, with land access to the scene of war, can defeat Japan if control of the waters around Korea is recovered from the Japanese fleet. To this end the government in St Petersburg decides on a long-term strategy. The Baltic fleet, after spending the summer of 1904 in preparation, sets off in October on a journey half way round the world.

There are minor disasters on the way out (such as the Russian fleet firing on British trawlers in the English channel under the nervous illusion that they are Japanese torpedo-boats, which creates something of a diplomatic incident with Britain), but the impressively large fleet finally reaches the China Sea in May 1905. The Russian warships head for Vladivostok through the Tsushima Strait, where a Japanese contingent of newly built, more modern and swifter ships, is lying in wait.

In a two-day battle two thirds of the Russian ships are sunk; six are captured, six limp to safety in neutral ports, just four reach safety at Vladivostok. It is a sudden and crushing end to the seven-month journey from home base.

Both sides now accept an offer by the American president, Theodore Roosevelt, to mediate a peace treaty. When the diplomats gather in Portsmouth, New Hampshire, it is certain that the terms will be to Russia's disadvantage. Control of Port Arthur and the southern part of the Liaotung peninsula passes to Japan. And Russia recognizes Korea as falling within the Japanese rather than the Russian sphere of influence.

this way to go to the Cosmic Elk main page